We need your consent!

We want this website to meet your needs as best as possible. To this end, we use cookies and the web analytics tool Matomo to learn which pages are visited most often. Your visit is currently not being counted. By allowing us to count your visit anonymously, you help us to achieve this goal. Web analytics enable us to adapt this website to your needs. No data is forwarded to third parties. For further information, please see our privacy notice. 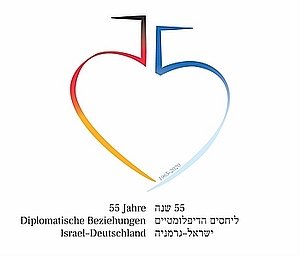 In 2020, Germany and Israel celebrated 55 years of diplomatic relations. Over the decades they have developed a close relationship of trust, partnership and intense cooperation in all spheres of society.

Half a century after the establishment of diplomatic relations between Germany and Israel, the collaboration in science and technology between the two states has reached an intensity which could not have been initially foreseen.

This increasingly close scientific cooperation contributed greatly to the normalisation of the political relations. Reparation was the Germans’ initial main motive. Currently, however, the cooperation between the high-tech countries Israel and Germany is on an equal footing.

Chaim Weizmann (1874-1952), the first president of the State of Israel and the first president of the Weizmann Institute of Science (WIS), which was named after him, realised that intelligence was 'the only raw material at our disposal.' In 1902 he already campaigned for a Jewish university in Palestine, which was realised when, in1925, teaching started at the Hebrew University Jerusalem. In 1934 he established the Daniel Sieff Institute, a forerunner of the WIS, in Rehovot, modeled after the German Kaiser Wilhelm institutes. The development of these and other outstanding science institutions in Israel could also draw on the immigration of German Jewish scientists who had to flee Germany in the 1930s.

Before 1933, scientists of German-Jewish descent played an important, and often formidable, role in science in Germany, as well as in the entire German-speaking region. From 1933 to 1945, the crimes of the Nazi regime brought these successful endeavors to a violent end. The German science community wanted to reestablish ties from those productive times before 1933 and, after the German Federal Republic had been established, sought collaboration with its former Jewish science colleagues.

From the start of the 1950s, there had been occasional contacts between Germans and Israelis at international conferences. The eventually break-through came in 1959 when the WIS issued an invitation to a Max Planck Society (MPG) delegation. In the course of this contact, the possibility arose for young German scientist to further their qualifications at an outstanding research facility abroad and the country thus not losing them permanently, which had happened with the migration of young scientists to the US since the 1950s. In turn, the scientists of the WIS – like their colleagues at Israeli universities later – hoped to extend the research infrastructure of their institutes through their cooperation with German researchers.

12 May 1965 is a historical date in the history of Germany and Israel: The beginning of diplomatic relations between Israel and the Federal Republic of Germany. While there had been scientific cooperation before, the contacts between institutions and the relevant scientists has become consistently closer since then.

Interministerial cooperation was started and increasingly intensified in the 1970s: The German-Israeli research collaboration between the Federal Ministry of Education and Research (BMBF) and the Israeli Ministry of Science, Technology and Space (MOST) is based on an agreement concluded in 1973. Since 2000, this interministerial cooperation has been broadened to bilateral industry cooperation, based on an agreement between the BMBF and the Israeli Ministry of Industry, Trade and Labor (MOITAL, currently: Ministry of Economy and Industry – MOEI).

The German-Israeli Foundation for Scientific Research and Development (GIF) has funded fundamental and applied research cooperation projects since 1986. A programme for junior researchers was established in 2000. In 1996, the BMBF developed the Excellence programme of the German-Israeli Project Cooperation (DIP) to support German-Israeli research teams; the German Research Foundation (DFG) has administered this programme since 2008. The Martin Buber Society Endowment Fund has offered scholarships for collaboration in the humanities and social sciences since 2010. The support organisations German Academiv Exchange Service (DAAD) and the Alexander von Humboldt Foundation (AvH) have for decades supported scientific collaboration between Israel and Germany. The Helmholtz Association opened a foreign office in Tel Aviv on 22/10/2018.

In 2008, the research relationships received a lasting momentum through the German-Israeli Science Year and the annual government consultations held since then. The German-Israeli Research Forum was organised for the first time in 2011 to further intensify collaboration. In the same year, the BMBF and the MOE concluded a government agreement for industry-led research and development, as well as for vocational training.

As an EU associate member, Israel has participated in EU research funding since 1996. Businesses and research institutions have received funding since the 4th Research Framework Programme and are cooperating in the current EU programme for research and innovation Horizon Europe.

The history of the collaboration in science and humanities is also reflected in a discussion between Dan Diner, Yfaat Weiss and Norbert Frei.