We need your consent!

We want this website to meet your needs as best as possible. To this end, we use cookies and the web analytics tool Matomo to learn which pages are visited most often. Your visit is currently not being counted. By allowing us to count your visit anonymously, you help us to achieve this goal. Web analytics enable us to adapt this website to your needs. No data is forwarded to third parties. For further information, please see our privacy notice.

Anath Fischer is professor at the Faculty of Mechanical Engineering at the Technion in Haifa. Her research focuses on Computer-Aided Design (CAD) and modelling for tool and machine designs, as well as the development of 3D printer techniques. Anath Fischer belongs to the third generation of scientists cooperating in the context of the German-Israeli funding programs. As doctoral candidate, she already participated in a German-Israeli research project funded by the Volkswagen Foundation in 1987. Since 1988 she has been involveld in the work of the Minerva Laboratory for Automated Assembly at the Technion – first as a doctoral candidate and then as a faculty member. Today she is Head of the Laboratory for CAD & LCE.

The diagram below shows the multiple relationships that have, in various ways, been formed between Anath Fischer and the scientists in both Germany and Israel. The result is a close-knit network ranging across several generations and research foci, made possible by mutually supportive funding. One generation of scientists passes this cooperation on to the next. 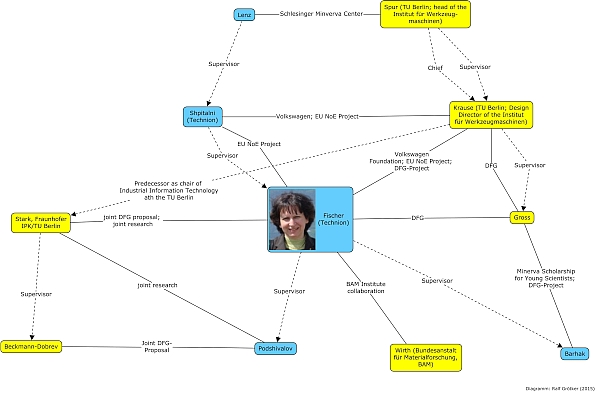 The Diagram shows relationships constituted by the mutual participation in funding programs (broken line), as well as relationships based on a succession of academic generations (doctoral supervisor; academic predecessor) (solid line). Israeli scientists are marked in blue and the German partners in yellow. The network diagram is based on information provided by Professor Anath Fischer (personal correspondence). | Diagram: R. Grötker

Scientific cooperation across borders, as depicted in this diagram, is no end in itself: Beside the shared use of resources in respect of laboratory equipment and personal expertise, cooperation is also the key to creativity and innovation.

Mark Lutter from the Max Planck Institute for the Study of Societies at Cologne, recently examined the effect of network relationships on a specific field in which success and failure strongly depend on creativity and innovation. In a large-scale study, he analysed data from the Internet Movie Database IMDb to identify the success factors of Hollywood directors. The result: Success needs both familiarity and diversity. Lutter: “Familiarity is necessary for an exchange of information and ideas. However, although familiarity leads to a good flow of information, too much of it means that all information eventually comes from the same source. This is why diversity and familiarity are required.”

This image also corresponds to the network relationships between the scientists in Germany and Israel. The relationships, built over many years and generations of scientists, constitute a high level of familiarity. This is only useful if information, with its flow facilitated by familiarity, is not merely repeated. Herein the value of cooperation across countries and cultures’ borders lies: There is a good chance that, due to the permanent exchange, ideas will be conveyed that will be new to one or the other party.